A little over six months ago I wrote a post about Whitman and his exposure to slavery and how it affected his writing. I ran across some new information about Whitman that I thought was pertinent to that discussion:

The nigger, like the Injun, will be eliminated: it is the law of races, history, what-not: always so far inexorable—always to be. Someone proves that a superior grade of rats comes and then all the minor rats are cleared out.

The problem in this is not so much that Whitman thinks races as we know them will disappear (although his language is harsh), but that he places value judgments on the races. The idea that some races are minor is scary.

I’ve been following the backlash from the media coverage of the Steubenville rape case pretty closely. I’ve read all the important articles and blog posts. I’ve read all of my friends’ statuses and comments. I’ve seen my friends’ anger, their commitment to rationalism, and their frustration with patriarchal systems.

I’ve always struggled with what I should be saying about things where I don’t resemble the victim. What should I say about male-on-female rape or sexism or racism? I like to talk about these issues but am I limited to parroting what female, minority, and/or LGBTQ friends and/or scholars say about them?

My friend, Tyler Borchers, pointed me to “Dismantling whiteness: Silent yielding and the potentiality of political suicide” by a professor here at Ohio University named Dr. Jungkunz.

To reiterate, part of what privilege has involved in garrulous contemporary settings has been a monopoly over speaking. We have witnessed this surrounding sex, sexuality, race, class and gender. Masculine, white, ‘heterosexual’, wealthy men are privileged speakers. So, to engage insubordinate silence along any of these components of intersectionality is to engage several transformative contestations and participations. First, silence can demonstrate a protest against racism. Such protests can entail: silence instead of an encouraging laughter as a response to a co-worker’s racially offensive joke, or an organized silent protest involving duct tape over one’s mouth to call attention to oppressive quiescence. These silences can cut off the air (speaking) that gives life (via racist stereotyping) to white supremacy. Block de Behar notes, ‘that only silence can offer a means of avoiding the automatism of language’ (1995, p. 4). Second, silence can act as a democratic yielding. This yielding is insubordinate as it challenges norms that try to dictate who should and should not speak – so, to remain silent as a way to allow the ‘other’ to speak is inherently resistant to a whiteness-speech configuration of power. This is a silence for empowerment and transformation. Finally, silence as a refusal can seek to end one political existence – whiteness – only to open up the possibility of an alternative to a racialized polity for the future. This silence as refusal can involve the following: not claiming a race on the census questionnaire, remaining silent when someone asks for racial identification over the phone or upon a personal ad and not engaging an entire array of racially offensive names, topics, movies, songs, discussions and so on. At an even deeper level, this silence can be an active refusal of aspects, characteristics – white personality traits if you will – that slowly but importantly begin to kill off one’s whiteness. For instance, the urge to speak up and out can be refused; the exuding of confidence can be refused; and even the lack of racial self-consciousness can be refused.

Too often, I start to believe that the only way to affect political action is through speech. Through action. But that’s not true. Often, the way I can be most subversive in my privilege is to yield my voice to oppressed groups. My voice is not unimportant or worthless. It’s just that there is nothing of value my voice can add to the debate. I am not a survivor. I know survivors, but I know them as friends. And I think they are far more qualified to talk about their experiences than I am. My role should be to encourage other non-survivors to listen. To listen. To be silent.

Note: When I typed “silence” into Google to try to find a picture, I most often found pictures of women being silent. Yikes. Then when I typed in “silence man,” I got photos of scantily clad men sneaking up on sleeping women. um wut.

There was a moment this summer, while I was teaching a room full of high-achieving, and in my mind, at-risk students, where I faltered. I don’t remember the lesson or what made me privately freak out in my mind, but I remember the feeling… the American dream is a lie, “at-risk” is a stupid term, students are students are students, and teaching students so they can live up to a white, wealthy ideal is pointless.

But I didn’t let the feeling take hold of me. I pushed it away. It got lost in the stress of lesson plans and grading papers.

Several weeks later I returned to Ohio University, where my main extracurricular commitment revolved around education reform, a nebulous term that means many things to many different people. And because I am someone who enjoys a good discussion, I made sure I was immersed in the literature of people who are critical of the reform movement.

It is within this literature, that I first read Dr. Camika Royal’s argument against the use of the term “achievement gap.” A term I had used countless times myself, achievement gap had become, for me and many of my peers, a shorthand way of articulating the problem we saw in education. Upon my first reading of Dr. Royal’s piece, I thought this was the problem with the term–that achievement gap did not accurately portray the complexity of the problem.

And organizations I am a part of changed; instead of using achievement gap, both Students for Education Reform and Teach for America have adopted “opportunity gap” as part of their lexicons. Dr. Royal suggested the term in her first piece about the achievement gap on Good.

Several days ago, however, Dr. Royal began suggesting that this simple substitution of the terms is insufficient. 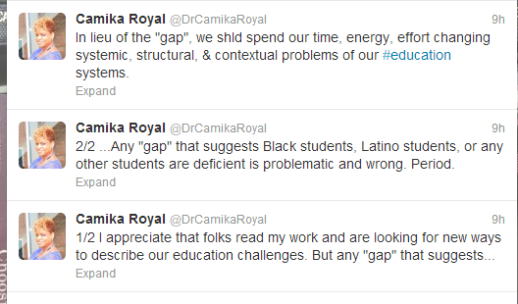 At first, I was taken aback by this. It seemed like organizations were listening to Dr. Royal. Why was she still frustrated?

And then I thought about her piece, again. This time, though, I thought about my summer experience, specifically the feeling I had had one day in class and ignored, and then some things clicked.

Dr. Royal is not frustrated about the term with a linguistic concern. She is frustrated with the power struggle that gets buried in language.

I asked my friend the other day how I can avoid a white savior complex. And he told me I had already fallen prey to it just by believing there was a group of people, categorically different than me, who needed my help. By dividing the world into white and black, I had already named difference, and by naming difference, I had already committed oppression.

If we ignore this problem, we risk, at the very least, pretension–the kind that claims you are not allowed to talk about a problem because you aren’t well-informed enough.